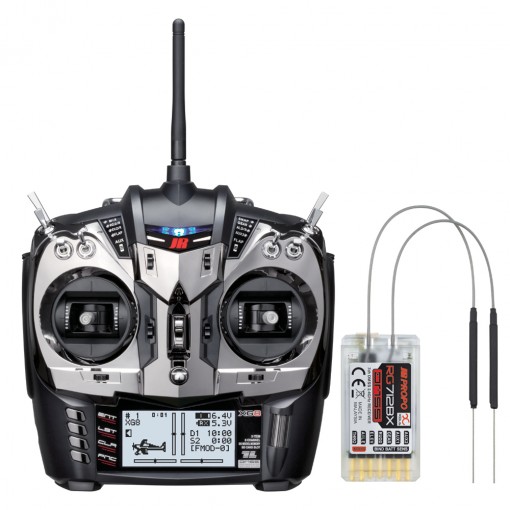 The XG8 is the first JR transmitter to come with a Li-Fe battery, being fitted with a 1400 mAh pack. This has greatly reduced the weight of the transmitter, which weighs in at only 770 grams. It also ensures perfect balance. The transmitter has an integrated charging circuit so just plug in the 9V AC/DC adapter supplied and the charging unit will shut down automatically once it detects that the battery is fully charged. No more worries overcharging! The XG8 offers Aeroplane, Helicopter and Glider modes, a 30 model internal memory, stick modes 1 to 4 and an SD card slot for model data sharing, expanded storage and software updates (SD card not supplied).

Programming is easy thanks to JR's well-proven, intuitive user interface with data entered using the familiar scroll bar and four push-button entry keys. The programming information is clearly displayed on the large, graphical back lit screen.

XG8 uses the new JR DMSS 2.4 technology, which besides offering a secure, robust radio link to control your models also offers advanced telemetry functions and JR's new Intelligent Output System. Receiver voltage telemetry is built in as standard and other forthcoming add-on sensors will give you real time feedback of information from your model such as the RPM of an aircraft propeller or helicopter rotor blades, temperature and variometer/altimeter readings.

JR's Intelligent Output System automatically selects control signals that need to be transmitted at exactly the same time and transmits the data for these channels as one complete signal frame. This ensures that there is no time delay when commanding servos used for critical functions such as a CCPM swash plate on a helicopter or when operating a four servo aileron wing.

Other features include side-lever controls on either side of the transmitter, a Touch Select System for switch selection, dual trim options, a user selected menu for frequently used functions, failsafe on all eight channels, user assigned switch function, programmable throttle cut and two independent programmable timers.

XG8 features all the functions that you would expect from an eight channel JR transmitter, plus quite a few new ones too.

If want to take advantage of the telemetry functions built into the XG8 easy to fit sensors are available to give you in-flight information from critical parts of your model.

The XG8 is also compatible with JR Propo New Xbus digital serial data communication technology. When purchased with an XBus receiver, the XG8 is capable of connection of up to 4 Servos per channel via the XBus serial connector. When using the XG8 XBus feature, this allows for connection of upto 32 servos (4 x 8ch) via special JR XBus Servo Harness (available separately). For connection of conventional (non XBus) PWM servos, a special conventional PWM servo converter harness is also available.